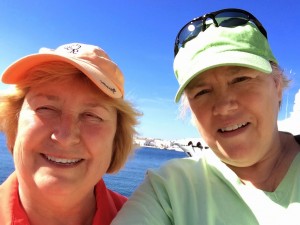 Our travel agent, Joy, of Classic Travel in Okemos, Michigan, really encouraged us to take our recent cruise. Not that we needed a push as we were already considering Mediterranean cruises, but she wanted us to take this specific cruise, because it would give us the chance to visit Santorini and Mykonos. Mama Mia, am I glad we listened. I’ve chosen to write about Greece last because as I reflect on the entire trip and time in Italy, Turkey and Greece, I have finally decided, Greece was my favorite.

A, is for Athens and the Acropolis, and when pushed, I tell people the Acropolis was my favorite site on the entire trip, and Athens is the only city I wish I’d seen more of. The Acropolis refers to the flat top of the very large hill, and on top of that hill sit remains of many buildings, the largest being the Parthenon. But I also enjoyed the Temple of Athena and the Odeum of Herodes. 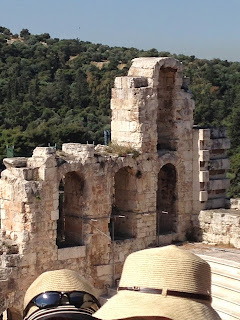 We had rejected a tour that would require us to climb to the top – nope, too strenuous. So we used the Hop On Hop Off bus to take us just to see the Acropolis, but once off the bus, we looked at each other, with challenge in our eyes, and began the hike. The physicality of climbing over the slippery, uneven marble steps to the top was a victory for me, even though we felt aided by the movement of the groups of ten year old students we’d wedge ourselves between.  They were well behaved, but they were ten, and you had to go with the flow which was up and over, and up and over until we reached the vista that granted a grand view of the city.

I just found the entire area attractive, and once on top, there was lots of room to roam despite all of the tourists and groups of people, and I found myself in a reflective mood pondering life in the 400’s BC, the time when the Parthenon was built. “The temple was unprecedented in both the quantity and quality of architectural sculpture used to decorate it. No previous Greek temple was so richly decorated,” according to the online Ancient History Encyclopedia. And here I was, soaking it all in. 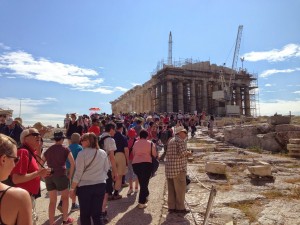 Once we got back on the bus after the climb back down, we just sat and enjoyed the view as we drove through the city, though on another visit, I would stop to see the changing of the guard at the palace, (it was happening as we drove by) and the Olympic stadium just because of the history, as well as a couple of interesting neighborhoods. Maybe another time. 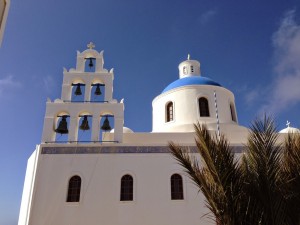 B is for blue – both the blue skies saturated with more richness than I ever see in Michigan and the blue domes of the Greek Orthodox churches found aplenty on Santorini and Mykonos, the islands Joy wanted us to experience, both small and inviting, and easy to do on our own.

Santorini came first for us, and refusing to wait in a long line for the cable car from the shore to the main town of Fira, we hopped in a boat for a ride to the northern village of Oia. Charming shops, crisp white buildings accented in blue which is the tradition, villas with infinity pools that seemed to flow down the cliff into the ocean – it all ended too soon when we hopped on the local bus for a ride back to town to return to the ship. By the way, B is also for baklava – I did manage to score some on the way back to the ship – how can you go to Greece and not have some authentic baklava though I know now, it is more Turkish than Greek. Delicious, regardless. 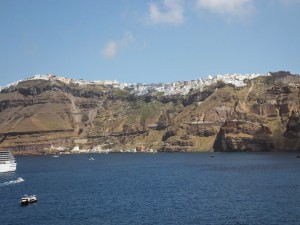 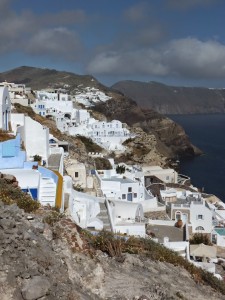 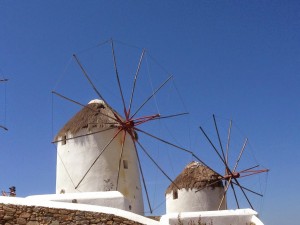 Mykonos was another island filled with white buildings, terraced housing and was very walkable. How much did I like it? I ended up having a coughing attack (brought on by seasonal allergies) and I prayed “Dear Lord, please don’t take me now.” I caught my breath, looked around at the beauty and said “But if I have to go…” It was the gentle way the water kissed the shore, the stillnesss of the historic windmills that stopped milling wheat in the mid 1900’s, the quaint alleys and paths where homes, churches, shops, restaurants and schools all intertwined, with a sense of peace and calm. I’d return there in a heart beat. 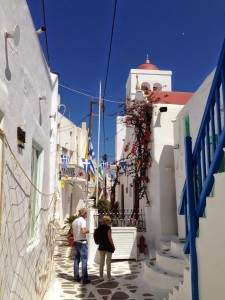 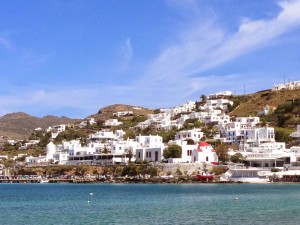 (I have since learned the homes are all painted white not only to help with the heat in the harsh summer, but since 1974, it has been the law in Greece that all new homes must be painted white. Talk about government control!) 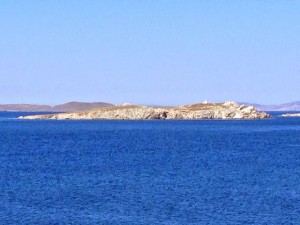 Seas as in the Mediterranean which runs into the Sea of Crete which runs into the Ionian Sea that runs into the Aegean Sea – or is it the other way around? It doesn’t matter. Beaches, white, red, black; sandy, some with more shells and rocks. Water, every shade of blue and green, and everything in between, encasing island after island – 6000 in all that make up Greece,  of which only 227 are inhabited. The seas were calm and we had a very smooth sail, and it was easy to be mesmerized by the gentle cadence of the waves, and I heard if we looked carefully, we could spot a dolphin or two, as if the cruise line had arranged this special benefit. I missed them but Kathy saw them on occasion. If you love the water like I do, this was a very special part of the trip.

Yes, Greece was beautiful, and offers a glimpse into a life quite different than mine, and probably yours. Could I go back? Well, I have since found a 12 bedroom (sleeps 24) luxury villa on Mykonos to rent for a week at a price of  $600 per person for the week. Now, I just need to find 23 more people! Who’s in? 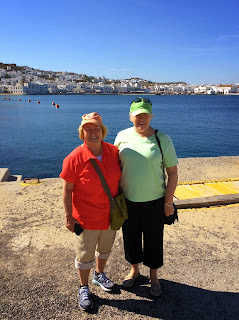 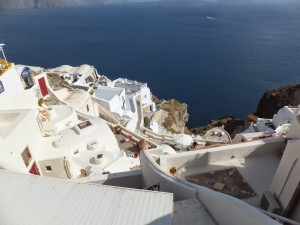 Note about using a travel agent:
It’s a lot easier today to find “travel deals” all over the internet, but we chose to work with a travel agent who not only took into consideration what we were looking for and then advised us on the best deals out there, but gave us hints and tips about what to see and do from her own personal experience. Can these be found in guide books? Sometimes, but it’s the personal care and concern that gives you more confidence when you travel, especially in countries that are occasionally in conflict or cities on watch lists. And when there was a fire at the Rome airport that would likely impact our flight, who did we call? Not the airline like everyone else, but rather our travel agent. Think of a travel agent as another insurance for the trip – there to help you when you need it most, and your friend along the way.