“I am so sorry to be calling you so late but we have just received news…”. By this time, I was fully awake, even though the clock said only 1:00 AM on the last night of our cruise.

Fortunately, it wasn’t anything personal, but rather the Rome airport had suffered a serious fire and our flight might be in jeopardy, very likely delaying our departure. My thoughts vacillated between “great, more time to

explore and eat more pasta” to “damn, I only have one pair of clean undies left”. But we had booked an extra night at the airport hotel to avoid a tight connection between the ship and the flight, so we were okay; our flight left as scheduled.
Our eleven day cruise around the Mediterranean Sea, preceded by three nights in Florence and three nights in Rome was nothing short of fun and adventuresome, and to pick a favorite stop or attraction is similar to asking which child you like best. But this I know – I am so over archaeological ruins and Renaissance art for the time being. Yes, I am impressed with the brilliant engineering and architectural minds that date before the birth of Christ, and the creative expression demonstrated through the works of greats such as Michaelangelo and Botticelli, but I tell you, I am ready to do some finger painting and lego building with my young nieces and nephews; maybe even “brush” up on the water color techniques I learned in an on-board class.

The cruise was good and generally, I can’t think of much I didn’t like. Oh sure, the food could have been better and hotter, but if I had to cook 20,000 meals every day for people from 62 countries, I’d have some challenges too. There could have been more information available about sights we passed, and the Greek captain could have been easier to understand, but he gave us a ride that was smooth as silk in a ship that was the cleanest you will ever find, and the sights we saw more than made up for the lack of information. I even discovered I could go without internet for many days at a time, but I sure did miss the news and knowing what was going on around the world.

After a day of exploring a new port or simply enjoying some warm sun, we took advantage of the top notch entertainment every night – singers, dancers, a great comedian, even a young Ukrainian violinist who should stick to playing and leave the joke telling to the comedian. The final show featured a Cirque du Soleil type performance with aerialists and other jaw dropping acts. It was simply amazing.
But after the show every night, the fun really started when we took our position watching the dance floor which was a favorite for some of the cruisers. We quickly nicknamed two women from Hong Kong as Dancing Machine 1 and Dancing Machine 2, who along with their husbands, seemed to be direct from the Hong Kong School of Flamboyant Ball Room Dance. Their black velvet and pink satin dresses that featured more fringe than fabric, accentuated their every move. But we also had fun watching Stiff Man and his wife (later named the Stiff Brit when he showed up with a silk cravat). Kathy was convinced he was very well book trained in dancing but lacked the finesse in the hips, whereas I thought he was probably as loose as an older British gentleman would be. Regardless, they were wonderful to watch, as were many others. 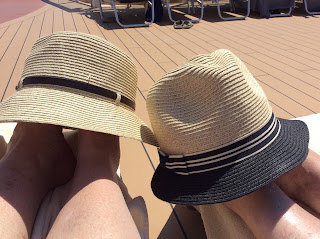 I think I was really starved for some sunny, warm weather because l really loved the sea days lounging by the pool more than anything else. Well, that and the fact someone made my bed and cleaned up after me every day, and cooked and served me whatever I wanted, any time I wanted it. Yep, that was all good too.

What really made this cruise were the people we met, primarily at meals (we always shared a table). There were people from Spain, India, New Zealand, Ireland, Malta, Brazil, Ukraine, Amsterdam, but most were from England, Australia, Canada and the US. Kathy and I had each just gone on one other cruise and we were newbies among cruising veterans. We were impressed when we met Terry and his wife Bonnie who have been on 30 cruises, but Xavier topped everyone – this was his 75th cruise and he is only 46! Did I mention he is from Monte Carlo and in the rough diamond trade? 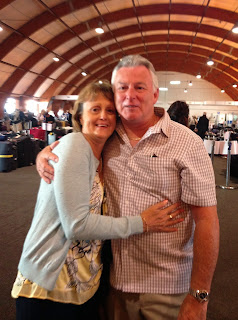 In closing, there was really one experience that was as meaningful as any for me. We’d been randomly seated for dinner with Rae and Caroline so many times that we practically knew each other’s blood types by the end of the cruise, and became friends in the process. They are from the south of England, and we had fun sharing in the excitement with the birth of Princess Charlotte. As we disembarked and picked up our luggage on our way to the bus, we heard someone calling our names from quite a distance. We turned and found our new friends running to give us good bye hugs. It’s always the personal experiences, isn’t it?

Our luck extended with us through the entire trip. We just missed the airport fire in Rome and within 30 minutes of our arrival in Detroit, the airport was evacuated due to a “suspicious incident”. Home never looked so good!

(Please see other posts that include more information on specific sights. Posts on Turkey and Greece are still in the works, but will be forthcoming soon.)
To leave a comment:
1. Locate the Comment section at the bottom of the post. It may say No Comments if you are the first.
2. Hover your cursor over the word Comments and click to open the box that says Enter your Comment.
3. After writing your comment, go to the box that says Comment As and choose Anonymous from the pull down menu.
4. To make a correction, click on Preview, and then Edit in the upper right of the box. Then click publish.
5. Click on Publish.