Admittedly, I suffer from never married syndrome, so I don’t always appreciate the effort that goes into making relationships work.  Hence, when the date was set for my sister’s 50th wedding anniversary celebration, I began to look for excuses not to go.

Takes too long to drive? I spent far more time attending an MSU football game and volleyball match a week ago. Nope, that wouldn’t do.

They have five married kids, eleven grandchildren and one great grandchild. Isn’t that enough? Would I even be missed? Ok, it wasn’t about me.

Fifty years – not sure even what the big deal is anyway. Yep, I recognized that as lame right away.

Then my nieces told me that everyone was expected at the affair Saturday night, and since those same nieces will likely make my nursing home decision, I knew there was no backing out. California brother would get a pass, Michigan sister would not. 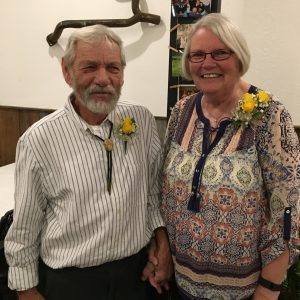 To be honest, there was no question whether I’d be attending and joining in the celebration. When I began to think about all the societal changes in the last 50 years, and managing those while raising a family of five on a farm in hilly southwest Wisconsin, I knew a good time was in order. Fortunately, their kids were all grown and gone when computers and cell phones invaded the family dynamic, and farm life didn’t allow much time for the kids to get in trouble, though let’s face it, teens are teens regardless of the setting or the era.

This is what I know about Barb and Wayne.

Yep, fifty years of marriage is something to celebrate, and I salute anyone who makes it. My Sievers’ grandparents made it, but early death prevented my parents and other set of grandparents from reaching it. This never married woman appreciates all of the work, sacrifice, (and fun) that comes with a long-lasting union. Here’s to 50 more!