There was one obvious route to our destination of St. George, Utah. We chose another. Colorado City, Arizona and Hildale, Utah were in our sights. Not on your bucket list? They needn’t be, but we wanted to view life in these two towns only separated by a state line, reputedly, still run by Warren Jeffs from his cell block in the Texas Department of Criminal Justice. Yes, we wanted to see the towns that polygamy made famous.

With the brilliant red cliffs as a backdrop, we drove hours on a narrow strip of shoulderless highway, up and over an unfamiliar mountain, sharing the road with few other cars. With a bit more gumption than usual, we left the paved road and drove slowly up and down red clay streets of these small towns. Desperate, desolate, depressed – pick your adjective. They all apply. 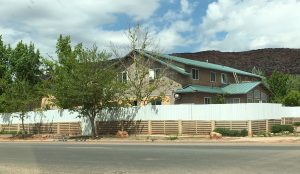 Aware that cameras followed our every move, we drove without talking, as if our car had been bugged. We observed one large home after another, some built of poured concrete, others with what looked like plywood siding, all behind tall walls.  Occasionally, we would glimpse children playing or adult women in traditional dress in the driveway. 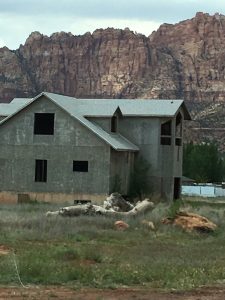 hat was most remarkable to me however were the tremendous number of homes partially built, but stopped mid-construction when Jeffs ordered the money to the church, according to one story I read.

We did not find a functioning school, though I know they reopened it last year. It may not have lasted; worn basketball backboards stood without hoops or nets on a weedy playground. There is little business, though a Subway sandwich shop has opened, and there is a gas station/ café where we split a BLT. I just had to patronize the Merry Wives Café.

I’m not sure if it was curiosity or just our interest in learning about the lifestyles of other cultures that made us take this trip. But this was hard to observe, knowing the travesty that occurs behind the compound walls, and at the expense of women, children, and the men who are not among the chosen ones .

As we drove away, I kept thinking about how this visit reminded me of a burn I had when I was 16. I would get a bit anxious every day I had to go and have the dressing changed; it was a slow, agonizing process removing the adhesive (the drive to); when the dressing was off, it looked every bit as dreadful as I imagined (the visit). And when it was redressed and I left the doctor’s office, I felt queasy and a bit sick to my stomach (the drive away).  My burn healed and left no scar. I’m not sure the same can be said for the people who live here.