I swear, I never imagined Hope Hicks would be front and center in my blog. To be honest, I wasn’t even too familiar with her. I knew that she was one of 45’s closest advisors, and was enlightened when I learned in People magazine about her relationship challenges with a couple of Trump’s bad boys, Corey Lewandowski and Rob Porter. And then there was the disclosure about telling a few little white lies as the president’s director of communication that led to her office cleaning party.

But truthfully, that had nothing to do with her journey into my patchwork journey.

It was her eyebrows, or more specifically, her eyebrow that was flashed across media images and framed her face every time I opened my email account. And before you know it, I was standing in front of my bathroom mirror channeling my inner Mary Traverse with Peter and Paul harmonizing as I sang “where have all the flowers gone,” except of course, I substituted eyebrows instead of flowers.

I quickly grabbed my magnifying mirror for closer inspection while I hummed, and at the appropriate line, continued singing, “gone to chin hairs, every one.”

Doggone it. The tricks our bodies play on us as we get older. I was prepared for sore knees, stiff joints, a more delicate digestive system, but disappearing eyebrows? Someone should rewrite the book Our Bodies, Our Selves, the Post-Menopausal Edition.  What a great customer base for everyone who used that as a guide in the 70’s.

For a couple of years now, I have been aware that it’s been the era of the eyebrow and all you have to do is hang around a college campus or anywhere 20-something women gather. You’ll be convinced you’re in remake of Whatever Happened to Baby Jane, the classic flick where Joan Crawford and Betty Davis’ eyebrows earned their own awards for drama and theatrics. Even one of our Michigan State University women’s basketball players said she has to do her eyebrows before every game. I’d rather she practiced free throws but that’s another post.

Now fortunately, I’ve always had eyebrows a bit on the bushy side and haven’t given two shakes what other people thought. A pluck here, a pluck there, and I was good to go. On a whim, I had them waxed once – in Japan – where a language barrier existed. It felt like it took years for them to grow back. 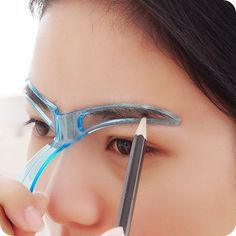 In no lifetime of mine will I get them tattooed though I know women who have done that, but now I’ve discovered there is a ‘handy’ stencil guide. I know peel-off stencils have been around for decades, but why not invest in a hard, plastic device that isn’t shaped anything like your face, and is guaranteed to jam your bathroom drawer every time?  And then I remember my bifocals.

No, I’ll continue to keep an eyebrow pencil handy when I want a bit more definition, and admire from afar the artfully crafted eyebrows of Hope Hicks, and all the other young women.

“You have a lovely eye-brow arch” someone told me once during a facial. “Never let anyone reshape that.” Trust me, that arch is safe, even if it is slowly disappearing.