Google
I’ve just returned from an end of summer trip to Michigan’s northernmost point and I’m not sure what surprised me the most – the unrivaled natural beauty of the area, the “step back in time” room we stayed in, or the name calling, by a man from Milwaukee, no less!
I love traveling throughout the country and exploring the tastes, sounds, and beauty found throughout the 50 states. This is my first in the series I’m calling America the Beautiful. In a couple of weeks, I’m headed out on a major road trip and I’m anxious to share the fun and discoveries with you. I hope you’ll join me. But, back to this trip…
Michigan’s two separate peninsulas are connected by the five mile long Mackinac Bridge, the Mighty Mac. The Upper Peninsula or U.P., as it is called, is surrounded by Lake Michigan, Lake Superior, Lake Huron, Wisconsin, and just kisses Ontario Canada at Sault Ste. Marie, (the Soo). Its residents are kindly and respectively referred to as Yoopers. But the U.P. is a very different world from the lower peninsula and my friend, Kathy, and I were in search of some of the natural beauty and local flavor it is known for.
Our first stop was the Pictured Rocks National Lakeshore. This fifty mile stretch along Lake Superior features huge dunes and beautiful waterfalls, but the stars are the rock formations themselves. From the National Park Service, “the Pictured Rocks are sandstone cliffs rising 50 to 200 feet directly up from Lake Superior. Mineral seepage creates the colors.” Ironically, you can only see them from the water, so we joined 150 of our closest friends for a truly beautiful sunset cruise.  The fierce winds and dangerous waves on Lake Superior are legendary, but this evening it was 70 degrees, and the water was like silk. 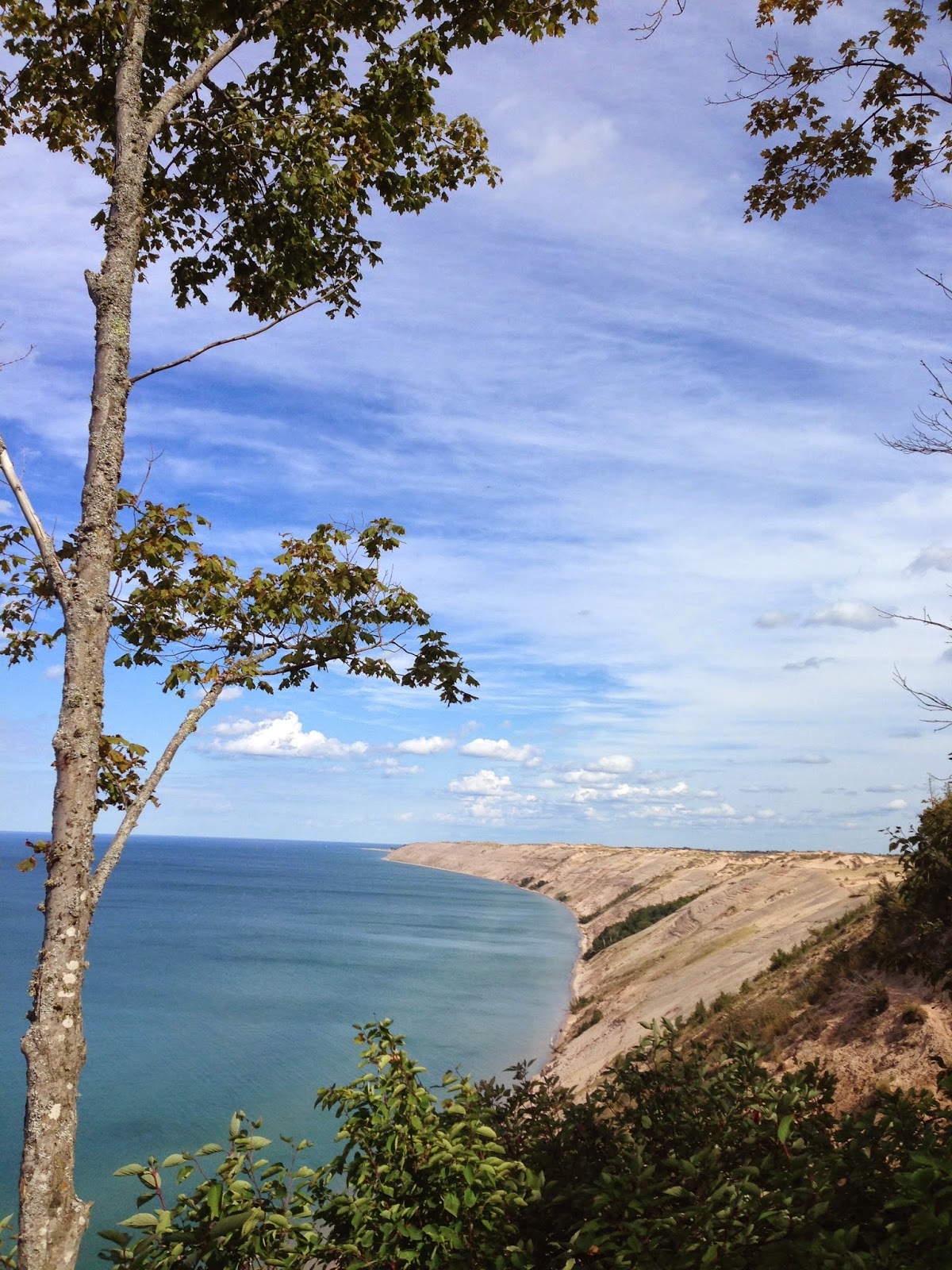 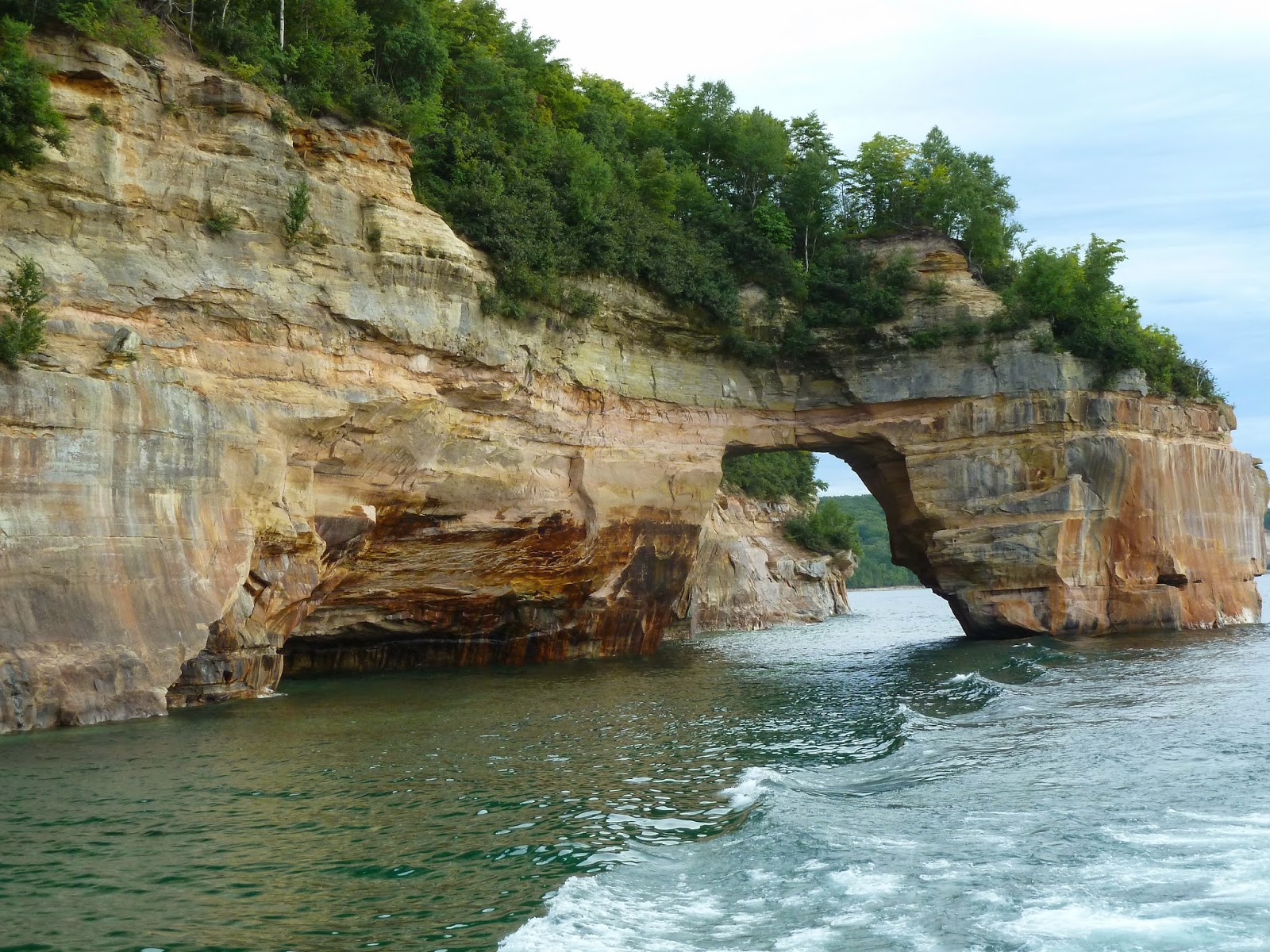 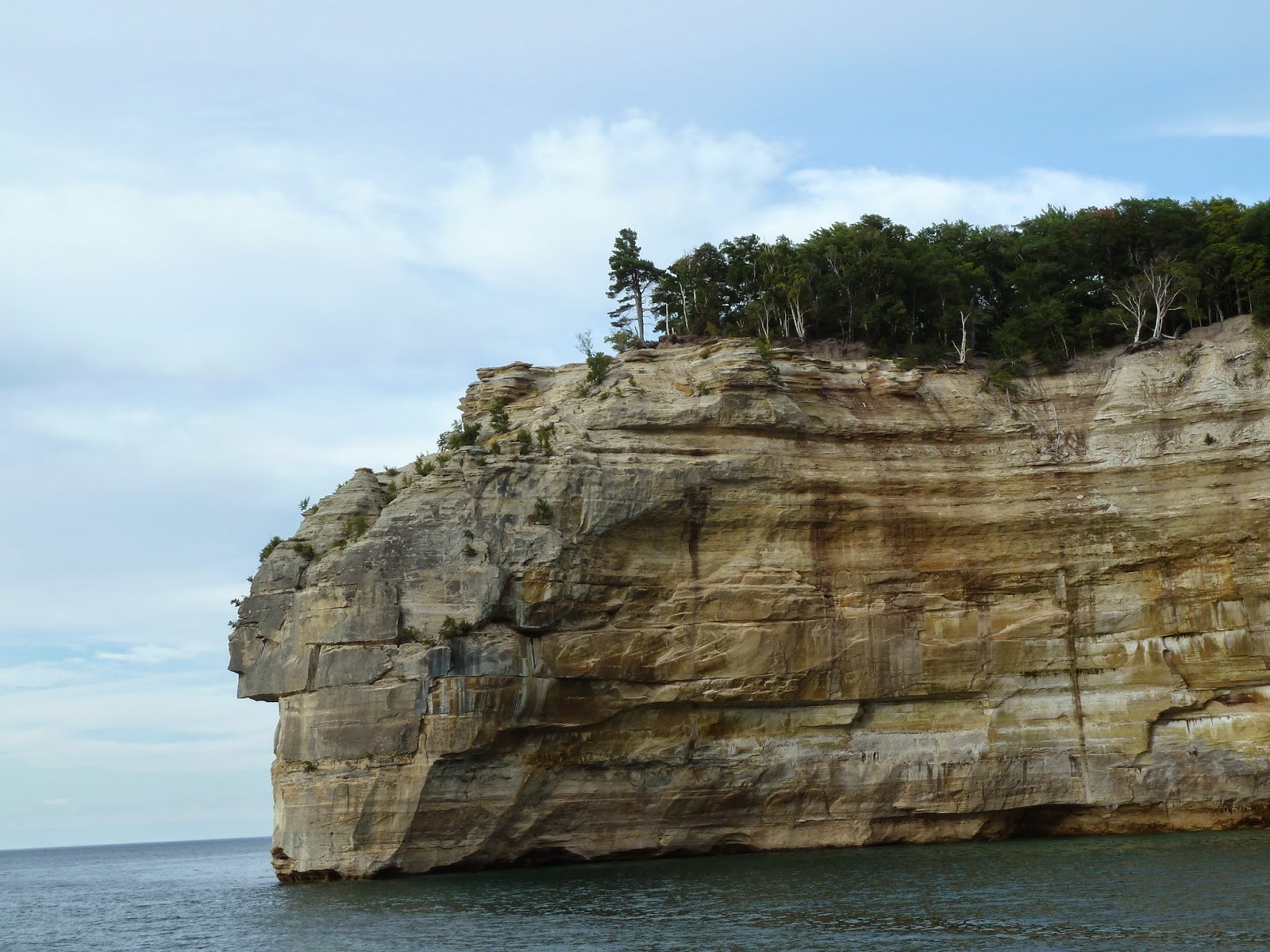 After several stops including the wonderful city of Marquette, we finally arrived at our final destination, Copper Harbor, a four corner town, 190 miles further northwest, at the very tip of the Keweenaw Peninsula that juts out into Lake Superior. With copper mines long closed, this area now attracts kayakers, hikers, fishermen and women, hunters and snowmobilers. Kathy and I are of course, none of those, but we wanted to see this natural wonderland and we weren’t disappointed. By the way, this is also one of the two launching points to Isle Royale National Park. 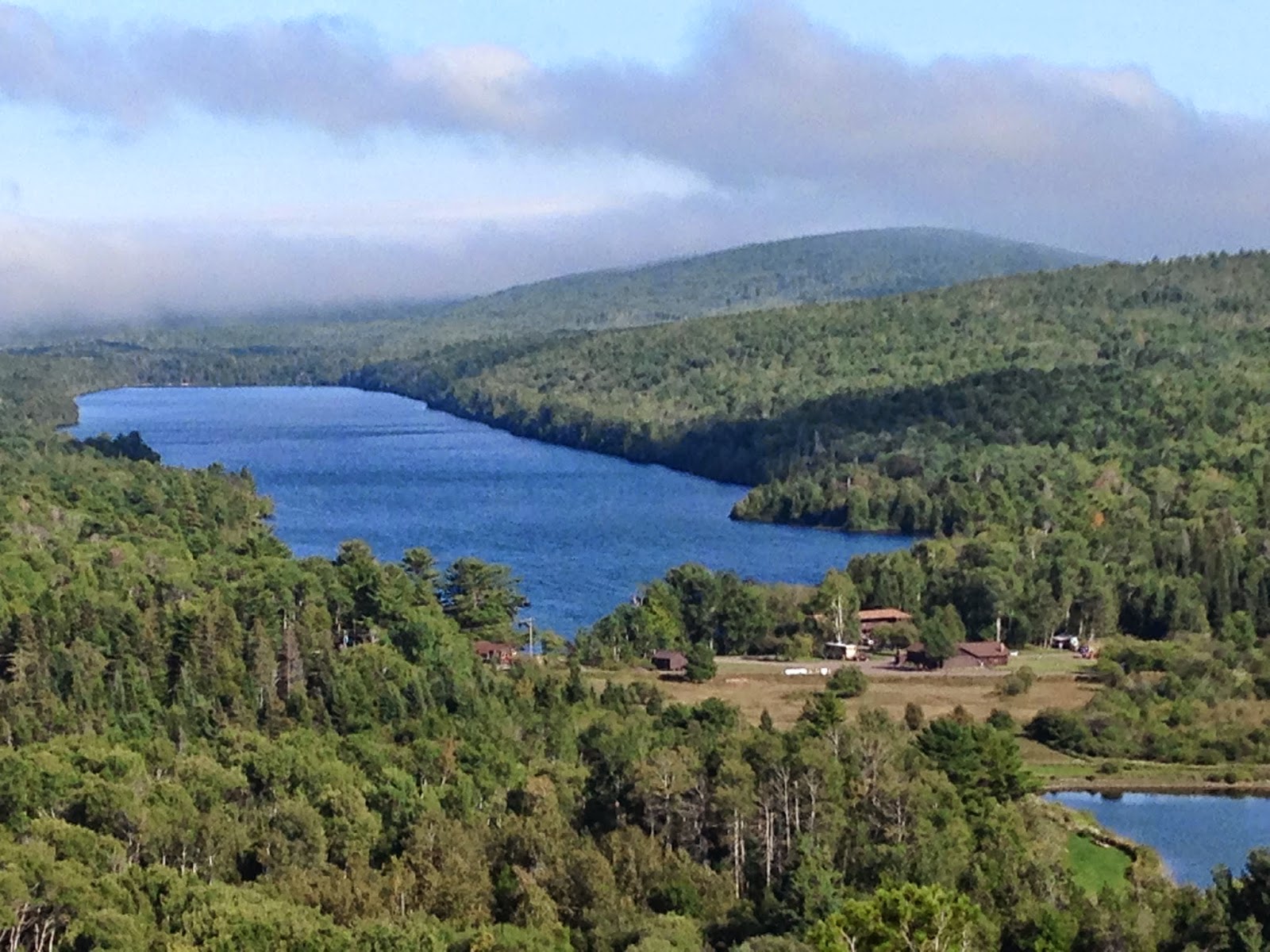 Taking advantage of the beautiful day, we drove up Brockway Mountain, “paved in potholes”, we’d been warned. Standing 1300 feet above sea level, from the heavens to the earth, it was a visual buffet, and can’t be captured by pictures. To our left was the vast expanse of Lake Superior with small islands serving as natural breakwaters, shrouded in wisps of fog; in front and to the right, greens of every hue sprinkled with flecks of gold and orange, broken up by inland lakes.  The small village of Copper Harbor hugs the shoreline. The scene was every bit as beautiful as anything I’ve ever seen. 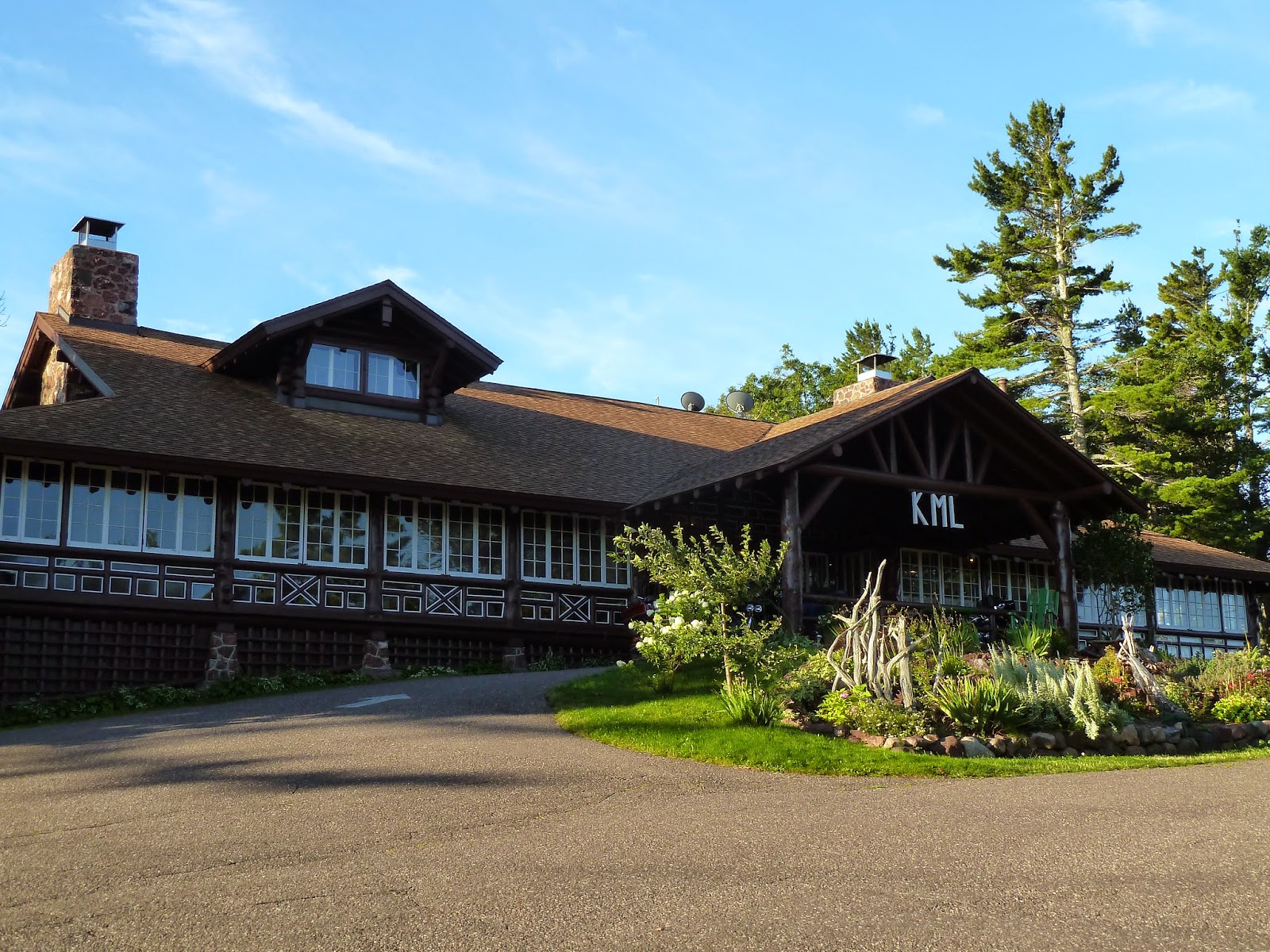 We finally checked in to the Keweenaw Mountain Lodge. It was built as a golf retreat in the 1930’s through one of FDR’s programs to provide employment in an area decimated by unemployment when the mines closed. It is still owned and managed by the county. I believe it was listed as National Historic Site in 1976 and it is evident that the rooms and cabins have not been updated since.
After a delicious dinner of whitefish and wild rice risotto, we swung by the bar area just to get some ice. It seemed an opportune time to chat up the golfers from Milwaukee who were getting in as many drinks as they could before the 9:00 bar closure. One of them reminded us, “Remember, this is a county run place.  They’re not interested in making more money.” And so we watched the Packer pregame show a bit before retiring to our room.
Upon learning I was from Lansing, Mr. Milwaukee smiled and said “Ah, so you’re a troll.”  Let me explain.  You’ve heard about the Yoopers. Yoopers however have their own name for people from Michigan who live in the lower peninsula – that’s right, we are called trolls because we live “under the bridge”.  Now, I don’t mind being called a troll by a Yooper, but really, by someone from Wisconsin?
It was now time to settle in, adjust the lighting on our vintage 70’s swag lamps, and let the tube TV warm up. I had been waiting this entire trip to watch the opening night Packer game in Packer country. Imagine my surprise however to learn that though they got every possible off-network station, the County didn’t want to include the main networks in the subscription package. Actually, surprise isn’t the correct word. There would be no Packer game for me. Needless to say, we were also well beyond cell phone or internet service.  For the record, Project Runway is not a replacement for the Packers.
Everyone needs to hop in the car and take a three or four day road trip around their own state. Every state has unique attractions, chunks of scenic beauty and distinct areas that are worth checking out. I’m glad we made it to Pictured Rocks and all the way up to Copper Harbor. It was a long way for pretty, but well worth the trip.
Note: Adding comments is a bit clunky, but very doable.  At the bottom of each post is a Commentsection.  Click on that and add your remarks.  Underneath that box is a box that reads Comment As: with several options. If you don’t have a google account or any of the other options, just click Anonymous. You may wish to add your name in the Comment box if you want me to know who you are. That’s it – you are all set.